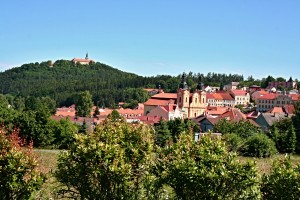 ”Iohannes natus quondam Welflini de Pomuk, clericus Pragensis dyocesis, publicus auctoritate imperiali notarius – John, a son of the late Velflín of Nepomuk, a clergyman of the Prague diocese, a notary public by virtue of the emperor”.

Already this first known simple wording on the certificate of notary of 1369 contains everything than can be found out about the saint’s youth. If in 1369 John of Pomuk was a notary public, he must have been more than twenty years old. Thus he was probably born sometimes between 1340 and 1350. In that time there were five municipalities named Pomuk in Bohemia. Nevertheless, there are no doubts about determination of the right birthplace. It was a market village near the Cistercian monastery of the same name founded by its parent Ebro monastery in 1145. In 1234, king Wenceslas I. authorised the abbot of the Pomuk monastery to appoint the judges who were supposed to try in Pomuk and Blovice the criminals captured in the monastery estate. In 1355 – 1367, in Pomuk whose name was as early as the middle of the 13th century also known as Nepomuk and that finally replaced the older name, a village mayor Velflín or Volflín is recorded who is commonly considered John’s father who was awarded the right of judge from the abbot of the monastery. The name (a diminutive of the German name Wolfgang) indicates his German origin, his office maybe a certain wealth. Notary John was obviously descended from the settlers who in particular in the 13th century were coming to settle the Czech monastery estates. John’s mother is not known. A little John might be baptised in the Church of St. James. However, it is not confirmed in any way, how he received his primary education, which might be in this church or in the Pomuk monastery.

Based on the tradition, John’s native home was situated in the place of the present pilgrimage church of St. John of Nepomuk. There was allegedly the building ”St. John” there where people often came to pray. In 1639, count Franti¹ek Matìj of ©ternberk bought it along with next-door houses at the suggestion of Ka¹par Drau¹kovius and after demolition of the buildings a small sanctuary in honour of St. John was founded there. This small church was completed as late as 1654 and it had to be consecrated to St. John the Baptist because John of Nepomuk was not recognised as a saint yet. In 1689 the church and the town were destroyed by fire but in two years the church was renewed. After John’s canonisation in 1729, a lot of processions streamed to Nepomuk and the small church could not accommodate such a great number of pilgrims any more. In 1734 – 1738 a new Church of St. John of Nepomuk and St. John the Baptist replaced it that was probably built based on the plans of a well-known architect Kilián Ignác Diezenhofer. This is a remarkable non-orientated building with the forefront orientated towards south. In the middle of the aisle there is a small altar allegedly directly in the place of the saint’s cradle. However, in fact an exact place of John’s birth cannot be determined.
Hundreds of churches all over the world are consecrated to St. John of Nepomuk. However, only one of them stands in his birthplace in the place of an older sanctuary that was built as the first one in honour of St. John.