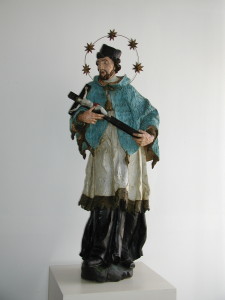 John of Pomuk was born about 1340. There have never been doubts about the place of his birth that is absolutely surely the then market village Pomuk belonging to a nearby Cistercian monastery whose impressive ruins below Zelená Hora (Green Hill) can be seen even now. The early Gothic Church of St. James, where John was most probably baptised (it is not known that in Pomuk or in a neighbouring village Přesanice there was another sanctuary), survived numerous fires. In the place where according to a later tradition there was the saint’s native home, nowadays there is the baroque temple sacred to John’s memory. We do not know a lot of facts about John’s parents. His father Velfín (Welfin) was a village mayor in Pomuk in 1355 – 1367. Mother of the future saint is not mentioned. Some sources indicate that she was a member of the Hasil family of Pomuk but this cannot be proved. John received his primary education at school established as early as about 1344 at the parish Church of St. James. Other studies, allegedly finished in the town of Žatec, were not proved. On the other hand, it is proved that John studied at the Prague University and ranked among the best students.

John’s way towards his fame and tragic end is shown in the chronological summary as follows:

1369: notary public in Prague 1380: altar priest in the St. Vitus Cathedral
1383-1387: studies of canon law in Italian Padua
1387: a canon in the Church of St. Giles and Doctor of Decrees
1389: a canon of the Vyšehrad chapter and the vicar general of the Prague archbishop in the spirituals
1390: on 26th August John replaces his post of a parish priest in the Church of St. Havel by the office of the Žatec archdeacon
20th March 1393: John dies on tortures, his body is thrown down from a stone bridge to the river Vltava
17th April 1393: John’s body got caught on the right bank of the river Vltava where it was found by Knights of the Cross from a nearby monastery who buried him.
31st May 1721: pope Innocent XIII declares John of Nepomuk beautified
19th March 1729: pope Benedict XIII declares John of Nepomuk a saint 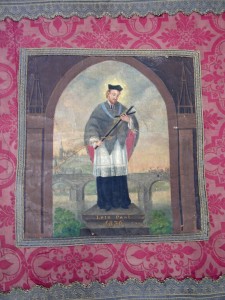 There were several causes resulting in John’s death. The main reason was the church schism and subsequent hostility between King Wenceslas IV and archbishop Jenstejn. The king cared very much about his own influencing appointment of bishops and other senior church dignitaries. In 1393 these disputes worsened in connection with the election of a new abbot of the Kladruby monastery. Historical sources indicate that John died due to the fact that he confirmed the election of the abbot of the Kladruby monastery and also due to the fact that he was an official of the Prague archbishop Jenštejn, the king’s sworn enemy. Other sources state as the main cause of John’s death the fact that he had the audacity to criticize the king himself. As another possible cause it is stated that John did not want to reveal to the king the queen’s secret of the confession. The main reason for the saint’s tragic death cannot explicitly be proved, however a lot of facts indicate that just keeping secret of the confession resulted in the king’s raving hate. This shows above all the king’s unprecedented activity in the torture chamber. He himself burnt John’s side with a torch in order to find out all necessary facts. In addition, in order to definitely dispose of the saint’s body tortured to death, he gave the order to throw it in the evening to the river Vltava in the place where nowadays there is a statue of St. John on Charles Bridge.
The mortal remains of St. John of Nepomuk are located in the St. Vitus Cathedral. A token of a deep respect and esteem for his person are hundreds of his statues mostly situated on bridges not only in this country, but also abroad.
In 1993, publishing house Mladá fronta, library Kolumbus, issued a monograph by PhDr Vít Vlnas titled “Jan Nepomucký – česká legenda” /”John of Nepomuk – Czech legend”/.
St. John of Nepomuk is considered a patron saint of waters. His heritage is the subject of a part of the exposition of the Nepomuk museum and the Kladruby monastery near the town of Stříbro. Every year hundreds of visitors including outstanding church dignitaries and notables come to his birthplace Nepomuk, in particular to commemorate an anniversary of John’s tragic death, to honour his memory.